Search for hotels near Elland Road

We offer a wide range of hotels near Leeds United from cheap accommodation to up market luxury hotels. Search our database of hotels to find the lowest rate for your stay closest to Elland Road.

Elland Road has been the home for Leeds since the clubs foundation in 1919. It was a part of Euro 96, the 2015 Rugby World Cup, and has hosted concerts by Queen, U2, and the Kaiser Chiefs among others.

Originally built for Holbeck Rugby Club, it was eventually leased to newly founded Leeds city in 1904 for a whopping £75 a year with an option to buy for £5,000, later reduced to £4,500.

Due to Leeds Citys early success, a 5,000 seater stand was built shortly followed by a 4,000 grandstand. In a post-war scandal involving illegal payments to players the club was expelled from the league. Yorkshire Amateurs became the tenants before selling Elland Road to the new Leeds United for £250.

In 1956, the West Stand and portions of the pitch were destroyed by a blazing fire. All backroom equipment and rooms were also ruined and the roof collapsed into the stand before the fire brigade arrived. The clubs insurance was inadequate to cover the estimated £100,000 replacement. A local appeal was launched where £60,000 was raised and a £180,000 West Stand was completed before the next season with 4,000 capacity.

After a period of financial turmoil in the early 2000s resulted in the stadium being owned by a Carribbean trading company whom it remains in possesssion of today.

Situated beside Leeds' city centre, The Clayton Hotel Leeds is just off the M1, at Junction 3 of the M621 motorway. Leeds Bradford International Airport is just 20 minutes' drive away.

In the heart of Leeds, Crowne Plaza offers a luxurious spa and indoor swimming pool. Its modern rooms include satellite TV, and Leeds’s bustling shopping area is just a 10-minute walk away. 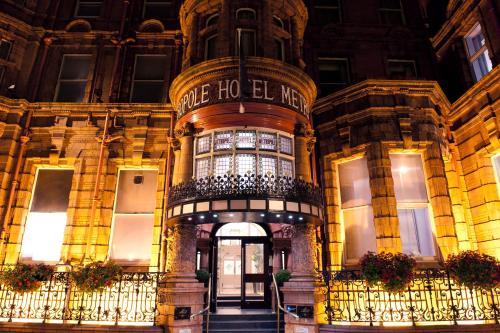 In the heart of Leeds city centre, this Grade II listed hotel is just a 3-minute walk from Leeds Rail Station. Guests have free access to the micro gym, and can enjoy the stylish Tempus bar and restaurant.

This elegant landmark hotel is the heart of Leeds city centre, and offers a grill restaurant and luxurious 4-star rooms with free WiFi.