Search for hotels near Stamford Bridge

We offer a wide range of hotels near Chelsea from cheap accommodation to up market luxury hotels. Search our database of hotels to find the lowest rate for your stay closest to Stamford Bridge.

Information about Chelsea and Stamford Bridge

Since founding in 1905, The Blues have played at Stamford Bridge. The stadium opened in 1877 as the home for London Athletic Club until the lease was acquired in 1904 to stage professional football matches. The official capacity was 100,000 making it the second largest ground behind Crystal Palace and was used as the FA Cup final venue.

Midway through a renovation project in the early 1970s, money ran out (oh how times have changed) and the entire stadium was out of sorts. In 1982 Ken Bates bought the club for £1 but not the ground. The freehold for the ground was sold to a property developers who subsequently went bankrupt allowing Bates to retake his freehold of the stadium with the club.

During the 84-85 season an electric perimeter fence was installed between the stands and the pitch. It was never switched on due to health and safety.

In 1990 the council gave approval for a 34,000 all seater stadium after the Hillsborough disaster. The North Stand, known as the Matthew Harding stand, was constructed in time for the 96-97 season. The South Stand, or the Shed End, was opened for the 97-98 season. Since 2005 it has been used as the away stand.

Chelsea have considered expansion of the stadium but for the location it is impractical. Vague relocation rumblings have been on the go including a bid for Battersea Power Station in 2012, however the council eventually approved redevelopment of the stadium. From 2017-18 season until 2019-20 season Chelsea will play home games at Wembley and return to a larger Stamford Bridge for the 2020-21 season. The new stadium will have 60,000 capacity, just a bit smaller than London rivals Arsenal. 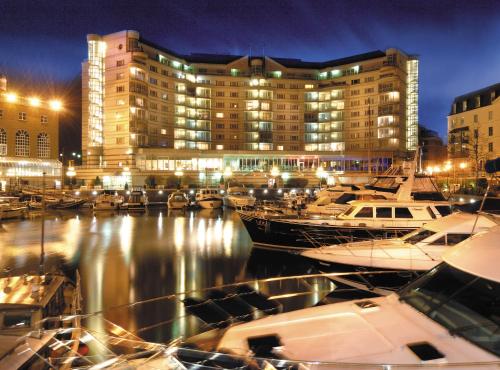 FG Apartment - Earls Court, Ongar Road is set in London, 600 metres from Stamford Bridge. Chelsea FC is 700 metres away. Free WiFi is offered throughout the property. The accommodation features a TV.

In Imperial Wharf, a 2-minute walk from London's fashionable King’s Road, DoubleTree by Hilton London Chelsea offers a 24-hour reception, bar and restaurant. The hotel has free WiFi throughout.